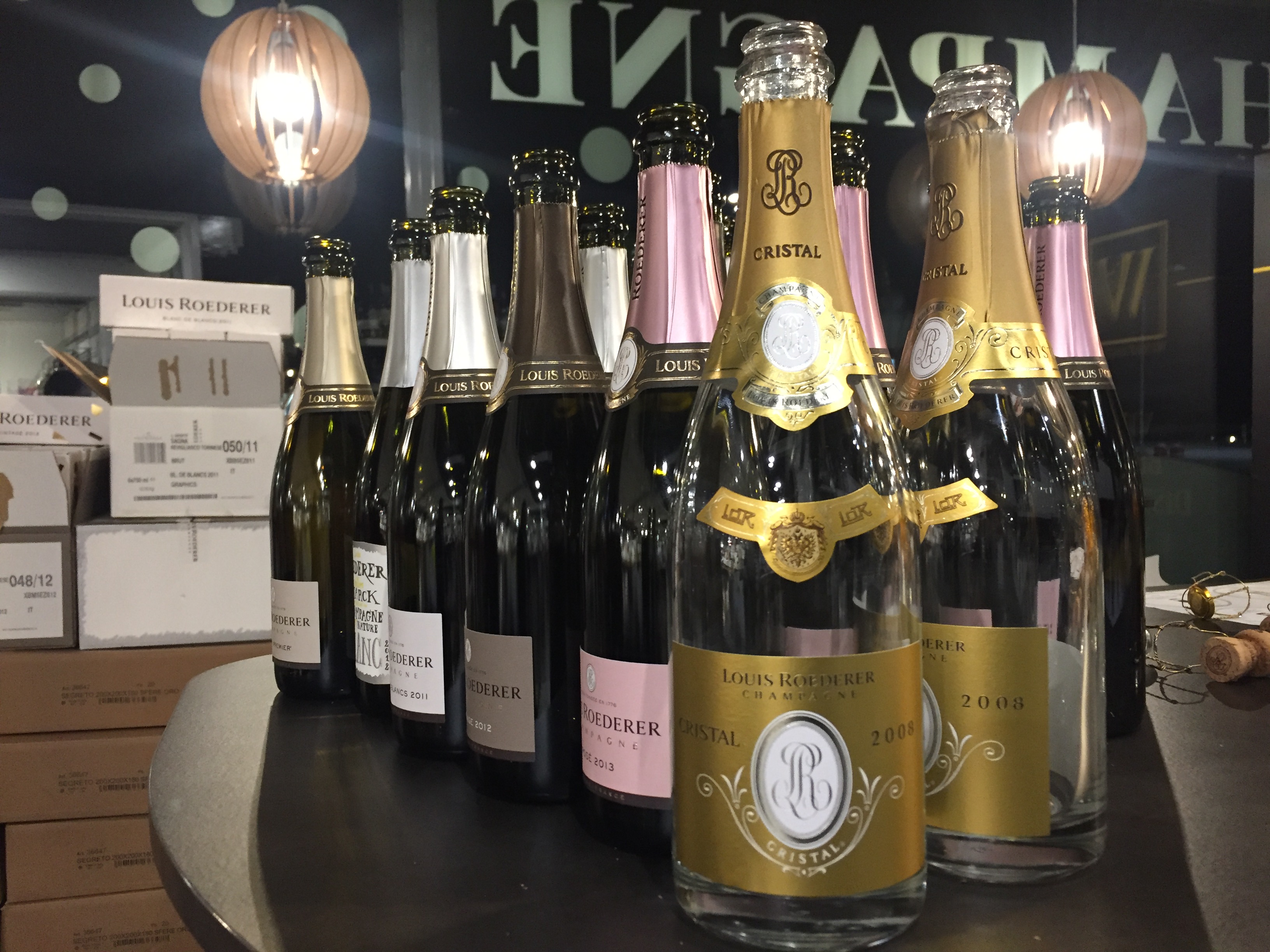 An evening to discover one of the most famous Champagne, Louis Roederer Maison held by the world champagne expert Alberto Lupetti.
In addition to the tasting of various Champagnes, the speaker accompanied us on a virtual visit to the history and curiosity of one of the oldest Champagne MAISONS, which we will try to tell in short:
Louis Roederer is one of the last large independent family-run Maison, unlike many Champagne producers who now belong to large financial groups.
At the time the church had redistributed the properties, dividing them into small plots and the big producers usually bought the grapes from various small producers.
Louis Roederer inherited the company from his uncle and gave it its current name.
Already in 1833, in contrast with the uses of the time, it began to acquire vineyards in large blocks in order to be able to count on its own grapes. It currently has about 240 hectares of vineyards which guarantee almost all of its grape requirements without having to resort to external contributions, thus guaranteeing complete control of the entire production cycle from the stump to the final bottle.
In addition, the vineyards are located in the best Champagne Crus.
Let’s talk for a moment about the soil, named CRAYERE.
Limestone, marine sediment. It is a thermal and water regulator, a salvation for champagne
Numerous studies have confirmed that the minerality of Crayère feels in the mouth, the freshness of the wines comes not only from the acidity of the grapes but also from the minerality of the soil

BRUT NATURE
Let’s talk for a moment about a new product (so to speak) of the Maison:
Brut Nature, the first was in 2006: a champagne born from a long project to produce a balanced champagne without dosage.
They have identified a specific block of vineyards in the village of CUMIERES, biodynamic cultivation, part of fermentation in wood and no malolactic fermentation as in the Roederer tradition, lower pressure approx 5 atm to make it creamier and make up for the lack of dosage.
6 years on the yeast and rest for another 6 months after the dégorgement.
Produced only in years of exceptional maturity (2006 the first, 2009, 2012, 2015)
This champagne is then linked to the famous French designer Philippe Starck, who tastes the wines and takes inspiration for the creation of the label

TASTING BRUT NATURE 2012
55% PINOT NOIR
20% CHARDONNAY
25% PINOT MEUNIER
Dosage 0  – No malolactic – such a wine without sugar and without malolactic fermentation, it could be a sword in the mouth but by making an atm in less than 5 atmospheres, it is made creamier and balanced
6 years on the yeast
An exceptional but difficult to understand vintage. At the first nose high cleanliness and freshness that comes from the crayère soil.
Rich champagne, smaller bubble as less pressure, feel minerality, clean mouth, subtle yellow fruit, smoky note

BRUT PREMIERE
Brut Premiere (sans année) represents the Maison’s business card, its style even if it is the only one that uses part of grapes that are not owned, and unlike the Roederer style, here wines make the malolactic for non-owned grapes .
A mixture of vintages to always be able to give a product that represents the cellar
It matures on the yeasts for at least 36 months and after the dégorgement it  rests 3 months in the cellar.

The “sans année” is 70% of the production of the whole champagne Region born in 700 for climatic needs.
In the assembly we also find the Vin de reserve (wine of reserve)  of 5-7 vintages stored in large barrels as in the 1800s.
(Treasure of Roederer who owns many hectoliters of these wines in order to give Chef de Cave the opportunity to always find the right balance). Roederer did not rediscover wood for fashion but always kept the reserves in large wooden barrels.

TASTING BRUT PREMIERE
40% PINOT NOIR
40% CHARDONNAY
20% PINOT MEUNIER
Up to 2014 it was 70% of reserve wines of the various years – 10% individual wines of various vintages – 15% of the assemblages of the wines of previous years that had been used and assembled for champagne)
It matures on the yeasts for 36 months at least
Opulent, creamy, not ethereal, elegant nose, red fruit, toasting given by reserve wines, notes of pastry.
In the mouth great freshness and creaminess, citrus trail and minerality.

TASTING BLANC DE BLANCS 2011
Partially fermented in wood approx. 20%
It does not  malolactic fermentation and has a draft lower than 4.5 atmospheres
100% Chardonnay only L.R. grapes
6 years on the yeasts
4.5 atm (demi mousse)

the year 2011 was a very difficult vintage. In France there is a saying “année de un année de rien” (that means a year with number one is a year of nothing)
But Roederer managed to make a fantastic wine.

In the mouth you  feel the fatness of chardonnay, mineral and citrus notes, it’s already beautiful evolved.
Stony perfume, you hear a ferrous note typical of the grapes of the Avize area

TASTING BRUT VINTAGE 2012
It reflects the territory and the best vineyards.

Pinot Noir grapes come from Grand Cru located in the Verzenay area
70% PINOT NOIR
30% CHARDONNAY
Small part ferments in wood
5 years on the yeasts
Tasty on the nose, creamy, toasted peanuts, pastry, fruit, classic toasted finish typical of pinot noir when it rests on the lees, dark fruit and citrus fruits together.
It is a jewel and will have a long life if you can save a bottle in the cellar and you are able to wait

TASTING ROSE’ 2013
67% PINOT NOIR
33% CHARDONNAY
Pinot noir comes from the village of CUMIERES and is cold macerated for approx. 7 days, (bled,  saignée).
Then the must is added to the must of the chardonnay and ferment together in steel and a small part in wood
Rests 4 years on the yeasts.
Fruity, citrus, the wild pinot noir of Burgundy: dark notes, chalky, dusty. Citrus mouth, slightly final tannin.

And now the star of the evening: THE CRISTAL
Louis Roederer II created the mythical Cristal in 1876, it is said on a whim of the Tsar of Russia Alexander II who asked Louis Roederer every year for the best cuvée of the Maison.
Russia was one of the major markets for champagne, which was not as we know it now but at the sweetest with about 100gr /liter, it was almost a syrup.
At the request of the Tsar, who feared attacks on his person, the bottle had to be made of  crystal and transparent to see if there was something inside and with a flat bottom to not be able to hide anything underneath.
Currently the bottle is no longer in crystal, but retains the characteristic of transparent glass and is wrapped in a specially patented yellow shielding paper to protect it from light (gout de lumière)
This champagne is produced with the best proprietary grapes (45 Domaine Cristal plots, biodynamic cultivation, vineyards of at least 35 years old), and only in the best vintages.
It is a wine that ages even for more than 20 years without losing anything of its freshness and character.

TASTING CRISTAL 2008
60% PINOT NOIR
40% CHARDONNAY
20% fermented in wooden conical trunk vat
For the fourth time in the history of Cristal malolactic fermentation on 19% of the wines
10 years on the yeasts
Lightness in density, ripe fruit that blends with fresh fruit
Strong and elegant perfumes
Power and elegance
In the mouth concentrated of energy, it explodes in an infinite salivation,

Minerality given by the Crayère (soil) and salty hints, infinite aromatic kit of citrus fruits, peach blossom, orange blossom, thyme, great acidity, a little bit missing the roundness that will come with time, but is already perfect

We will stay chasing perfumes, but as Mr. Lupetti said: you just have to ask yourself what it is missing … and the answer is easy: nothing

At the end, a special thanks to WineFashion wine shop in Buttrio (Udine) for perfectly organizing such an important evening.
WineFashion is a point of reference in the region where you can find many interesting labels from all over the world, as well as a safe address for great champagnes. You’ll be welcome by wine experts who will be able to advise you on your purchases.

A sincere applause to the Speaker Alberto Lupetti who accompanied us along the vineyards and history of the Maison with great knowledge, passion and enthusiasm.

I VINI IN DEGUSTAZIONE